Australian travellers are again reminded of the need to check their “measles” status before heading overseas.  Some individuals may have incomplete or no protection and it cannot be assumed that all intended destinations have Australia’s level of herd immunity.  There is no room for complacency given the change in global conditions. Two doses of the vaccine are necessary for lifetime protection.  Measles vaccine is a very important travel vaccine.

Case reports may be unusual in Australia (81 cases in 2017) but there is a disturbing trend upwards (103 in 2018).  Of concern are the 23 notifications in January 2019 (10 from WA and 9 from NSW). In South Australia there has been just one notification.  Australia isn’t alone with many popular overseas destinations also reporting increases.  In July last year I reported major outbreaks in “well off countries”:

“Between January and April 2018, more than 1800 cases of Measles were reported in South West France. There were 2 deaths, one 26 years and the other 32 years.  More than 150 cases have been reported in Wales this year – more than 3 times the number for the same period last year.  In Serbia, between October 2017 and June 2018, more than 5500 cases were reported with 15 deaths. Thirty percent required hospitalisation. “

This month the World Health Organisation (WHO) has reported that Measles notifications have doubled in the last year – up from 110,000 to 229,000.  This is likely a gross underestimate with the total number closer to 2 million.  More than one third of the reported cases came from the wider European region (82,596).

[Measles in Europe: record number of both sick and immunized]

We have to now consider many European destinations as travel away from our “herd”.  The protection we enjoy in Australia cannot be taken for granted when we leave our shores.  It is also our responsibility to make sure we don’t bring back any unwanted guests like the Measles virus!

Measles is not a benign disease, particularly in adults!  We are very fortunate to be able to protect vulnerable individuals within our community through herd immunity.

Measles remains a very serious health issue in many less developed countries. Consider Madagascar with more than 66,000 cases and possibly more than 1000 deaths since October last year. Such outbreaks of preventable disease unfortunately go unnoticed by the world media. On the other hand a disease like plague which conjures up visions of “the black death” always gets exposure. In Madagascar in 2017 there were 200 deaths attributed to plague and this outbreak attracted far greater media exposure than the current Measles one.

The index case in Australia is often an unvaccinated or poorly vaccinated returned traveller.  I believe it is important for public health authorities to provide full details on the likely region of contact. In the future we may see travellers needing to show proof of vaccination on arrival back in Australia. Such proof is required for Yellow Fever vaccine when returning from certain countries in Africa or South America.  Perhaps the case for Measles is more pressing at the current time.

Measles was once a “growing up” disease in Australia with most adults “naturally immune” through prior exposure if born before 1966.

Prior to the Measles & Rubella Initiative in 2001 more than 800,000 children world-wide died each year – most under the age of 5 years. While the number of deaths has significantly dropped it still remains a major cause of death in children.

According to CDC in the USA, “in the decade before the live measles vaccine was licensed in 1963, an average of 549,000 measles cases and 495 deaths were reported annually”. It is likely more than a 1,000 people developed chronic neurological disability. These figures are likely to be an underestimate as underreporting was common.

There is ample evidence to support the case for immunisation: 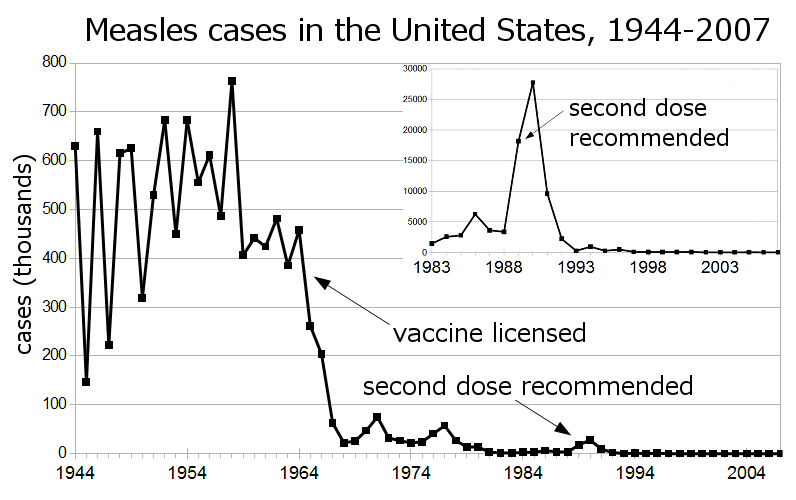 Measles is a highly infectious disease. The virus can remain active for up to 2 hours in the air or on surfaces following a cough or sneeze.  Over 90% of close contacts of an infected person will contract the disease if not already immune (previous disease or vaccination).

The symptoms of measles include cough, fever, skin rash and conjunctivitis. It is the secondary health problems which are usually responsible for death. These include pneumonia, diarrhoea leading to malnutrition and encephalitis.  Poor access to health care in poorer countries contributes to the high mortality and survivors may have long term disabilities including blindness.

Measles may be a risk to individuals who may be immunosuppressed for various reasons (illness, medications etc).